You are here: Home / Life / The Most Full Adventure With Camping for Our Anniversary 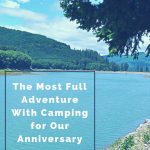 As part of being a Kia Partner, this story is inspired by it. With the long-term use of a Kia Soul. However, all thoughts & images are 100% my own. The post may also contain affiliate links.

While we were able to go camping for our anniversary, Jason’s current company does a fantastic thing for its employees.  Where they have these anniversary celebrations, each quarter, I think it is; they do some late lunch or something to thank employees for their service—also handing out unique gifts for those that are hitting milestone numbers.  Jason happens to be around our anniversary every year, which can lead to some issues in planning something for our anniversary.  Not that he has to attend, but enjoys attending.

Because his gathering was on Wednesday, the 20th of June, we opted to wait to leave Thursday.  Even though he had that Wednesday off, I knew he’d like to go if he could. Thursday was the first day of summer, and yes, also our anniversary.

Jason loaded up Ruby the Kia Soul some Wednesday evening so that we could leave at a decent time the next day. But you’d never guess just how full the Soul was until I show you.  Now, remember, we are tent camping. I was a little afraid we were going to have issues fitting it all.

There was no question that we had Ruby stuffed to the gills, but we made it work.  Jason did, not I, as he is the Tetris/jigsaw king. Ruby, the Kia Soul, was feeling her insides; that is for sure.

Camping for Our Anniversary

I am happily wearing my road trip shirt that I remembered to wear for the first time with all our road trips since I got it.

We were filled and ready for camping for our anniversary adventures.  Roxy was bursting with excitement, too, by the way.  She couldn’t contain herself as we loaded the car.  Roxy was feeling anxious that we were going to be leaving her behind again.  Though she spied her bag, so she knew she was coming.

On the way to Taidnapam Park, we opted to go the quick way, the freeway.  Check-in was at 2:30, and so we wanted to get in and settled as quickly as possible.

Roxy was living her best life on the way when we got off the main freeway and being able to hang her head out of Ruby & sniff that new air.

Once we got to Taidnapam, we just mainly got settled in.  We played some games and took a short walk.  We didn’t do much exploring. I tried to get a family photo, but Roxy was just a wee bit too excited and was having a hard time sitting still and thought kissing Mommy and Daddy was the key.

We played Tri-Ominos – which has quickly become one of my favorite games and had some taco salad for dinner.

Friday ended up being our full day of exploring.  The one day we had entirely at the campsite.  There were a few small trails we found around Taidnapam, along with what used to be the fishing bridge.  While people still fish off of it, Riffe Lake is shallow waters, and because of that, don’t expect much luck fishing off of it.  The boat launch there & the swimming area there have also been closed for quite a few years because of the low levels of Riffe Lake.

It was still pretty though and we did see a few testing their luck of fishing.

Taidnapam Campground also does this really cute thing by hiding faces around the park.  You can read about it below.

After our big old loop of a hike, we made it back to our campsite.  Roxy was pretty thrilled with being back at camp and wanted to go in and out of the tent.  One time she came out with her football in her mouth and shoving her way through.  While Jason didn’t capture her at that point, he did after she made it.  It was adorable, though.

We had one of my favorite camp dinners this night, which looks like a big blob of goo in the picture but is amazingly tasty and, most importantly, easy.  It’s asparagus at the bottom (seasoned and then topped with feta), salmon (seasoned, pesto on top of it), tomatoes on top of it, and topped with a bit more feta – all wrapped in foil.  Then throw on top of the fire and let cook.

Yum!  We, of course, enjoyed some more games (Blokus and Card Rummy) before it started to rain a bit hard on us and we had to move into the tent.

Time to pack up and everything and make our way home.  Packing up, Ruby didn’t seem to go as smoothly heading back home as it did heading out.  Even though we had less food and drinks to try and fit.  More hurried, I guess?  Because we had a bit more time and relaxation to take in, we decided to head the long way home.

Which meant going towards Mt. St. Helens and other pretty back roads.

Such beautiful country we are fortunate to live in.  I love that we are so close to the mountains, the city, and even the ocean.

We had such a great time camping and while two nights was better than our one last year in Ruby’s sibling, still thinking that 3 nights plus would be better.  More relaxation and exploring.

Our camping for our anniversary though was a great success!  Jason and I talked about it being an annual tradition from now on.  One we hope to keep.

11 shares
We use cookies to ensure that we give you the best experience on our website. If you continue to use this site we will assume that you are happy with it.Ok