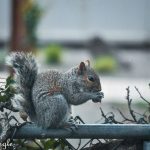 It was another win for me with this 2019 Catch the Moment 365 Week 13. Gathering all seven days of photos, even if they are not the most photogenic. A pretty quiet week happened, until the last day of this week of photos, where I had a bit of a melt down.

A little peek at our last week is now up for your viewing.

Day 85 – Tuesday, March 26th – Jason had the work pager for the week, which means we go around and do closing on certain properties on Tuesdays & Mondays. Roxy was watching Daddy walk in on this and I thought it was super cute.

Day 86 – Wednesday, March 27th – The skies were so dark when we headed out to Wednesday soccer. Tried to get the photo and capture the darkness with my camera phone but it just didn’t come out correctly.

Day 87 – Thursday, March 28th – Happened to look out the washer/dryer room window after Jason went out for a page and saw this little guy. First I went to get my camera with the short lens and realized that wasn’t going to capture him well. Went to get my long lens sure that he’d be gone by the time I got back. Surprise, he was still there happily munching out. Love him.

Day 88 – Friday, March 29th – Sat down to try and work on this jigsaw puzzle again. It’s taking me forever it seems but I don’t sit down often to work on it and it is an annoying shape and the way you need to do it. I am getting there though, slowly.

Day 89 – Saturday, March 30th – Did some prep playing with Roxy with the ChuckIt launcher for our video and photos for the next day. She was pretty thrilled with it all at the time.

Day 90 – Sunday, March 31st – Roxy and I in cuddles after a hard day of trying to get her on video playing with her ChuckIt. She was being her stubborn herself and had other plans for the day but we got it done well enough.

Day 91 – Monday, April 1st – It was a hard day. And this was me after that said hard day. Headache was with me most of the day. I freaked out about the edits I needed to do for my ChuckIt video, worried about something else that came up, and just in general had a bad day. Which led me not going out to Final Draft Taphouse in the evening like I planned. We were going to go early for food and get my photos for a Local Tuesday spotlight on them. Then I was going to join in on Brews n’ Write-In but alas, all canceled, I felt too much pressure in this day.

16shares
Previous:
Roxy Gives You the Most Spring Type Fun a Dog Can Have
Next:
2019 Catch the Moment 365 Week 14 #CatchtheMoment365

16shares
We use cookies to ensure that we give you the best experience on our website. If you continue to use this site we will assume that you are happy with it.Ok