You are here: Home / All About Me Fridays / Angie / How I Found Out I Was Pregnant – Telling You Our Story 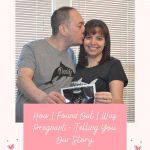 I have some big news around these parts! Yep, as you guessed from the title, I am pregnant. Remember in December and January, and I just kept saying I was so gosh darn tired. Well, we now know why. I thought it could be fun to tell you how I found I was pregnant. Are you ready for my little story over how I felt the last few months?

Here I am, 41 (Jason is 50), and we are having our first (likely ONLY) baby. It came as a shock. I truly didn’t believe I could get pregnant. Not that I found out officially or anything; it was just a feeling. And until now, that feeling stood the test of time. Until it didn’t…

We always said, if it happens, it happens; if it doesn’t, it doesn’t. Kids or no kids, we were going to have a great life. And when you think you know your path, guess again, here comes a new path.

How I Found Out I Was Pregnant

What many of you don’t know is that for many years I watched kids. I nannied, I watched kids in our own home. We were around kids all the time. Babies, toddlers, older children, all of them. We know kids.

But I decided when we moved here (Washington) that I wasn’t going to do that anymore and have loved my new path, for the most part. I’ve written in some form all my life, so it made sense to try and earn from doing just that.

And now here we are, a little late in life, having an actual baby of our very own. We can hardly believe it, and I didn’t until I saw it on the ultrasound. We’ll get to that later.

My periods have been fairly regular since I started taking thyroid medicine. Before that, it was never regular, and I’d miss months with no thought. Hence probably why I thought I couldn’t ever get pregnant anyway. I missed my period in December but didn’t think much of it because I was stressed and anxiety-filled. I was feeling off, but I feel off quite a bit, so I just chalked it up to my normal off feelings from time to time.

The whole month I felt weird. But never felt sick as you hear when you are pregnant, so again I didn’t think that was it. I feared ovarian cancer because it can make you miss your period and otherwise feel rather normal. Being that it can be silent, I was sure that I had something awful like that. Because that is who I am, I fear the worst of whatever is happening in life.

Besides feeling so freaking tired and that off feeling, I felt fine. I did have what I thought were regular cramps most of the month, which made me think I’d see my period at any time throughout the whole month.

Here comes January, and my period still doesn’t show. By this time, I am sure something is awfully wrong, and I am scared. But to check the boxes, I went and got a pregnancy test (which has two tests in it). Reading the directions, even if it was positive, it could still be what I feared.

And indeed, the first test quickly said pregnant. I still doubted it. Still thinking cancer. I take the other test another test in the morning, and once again, it said pregnant. Here we went, I made an appointment with my regular doctor at her next open time, and we waited some more.

Throughout January, I once again felt fine. More hungry. Maybe? But not sick. I had a tight feeling stomach, which was a weird feeling. My back hurt but my back hurts quite a bit from time to time.

Finally, February 3rd came, my appointment time. Jason took the day off to go with me. The temperature taker guy almost didn’t let him go through with me until Jason said she is finding out if she is pregnant. Cause I just looked at him when he asked what my appointment was. I didn’t know the words of why I was there.

We waited over an hour from our original appointment and a bit before I was called in, the nurse came out to tell me to go down to labs first. So we did that and waited some more. I finally got in but the appointment itself felt useless since she couldn’t tell me if I was pregnant. My lab test for HCG hadn’t came back yet. My HCG didn’t come in until late that night. And it was indeed high. At around the level it should have been around 12 weeks.

For me, I still thought it could be cancer because HCG levels could be that high with it. Because that is how I am and how I think

The ultrasound people call a couple of days later to set up the ultrasound. We get the February 16th date late in the evening. Perfect. Still thinking they are going to find something horrible, I anxiously await that appointment.

I made sure to drink the four cups of water that I was asked to drink before this appointment. I had to go to the bathroom badly by the time we got there. The ultrasound tech gets us in, and as soon as she puts the ultrasound on my belly, there is a loud and clear baby. Well, no more questions on what is going on now.

She ended up having me empty my full bladder (going twice) before she could move forward with the full ultrasound. But there was a full-sized baby there on the screen, moving and wiggling. It was weird, like I was watching a video, not what was in my actual belly.

We started telling people that Sunday (February 21st). Jason made up cute frames with an ultrasound picture for each grandparent. We made sure my Mom got hers in the mail before telling my side of the family.

And finally, we made our social media announcement this last Sunday, February 28th.

And here I am finally doing the full blog post about it.

Ready or not, here comes baby. We haven’t decided yet if we are finding out the sex of the baby. We will make our decision before my 20-week ultrasound, which is March 26th.

Now that it’s all fully out of the bag, I can hopefully get moving on more blog posts. I have an idea for little getaways before the baby comes and telling you all about it and make it an interconnecting story.

I am due August 16th to 21st, just in case you were curious.