I was lucky enough to get chosen to sample & share a dress of my choosing from Old Navy through Crowdtap.  How excited was I?  I got the friend that wanted the “share” portion of my coupon, these tend to go quick when I get them, but I try and pick a different person each time.  I usually go with the one that speaks up first gets it, so the luck of the draw sometimes.  🙂

This time it was my friend Angie that got the other coupon for the free dress.  I sent it down to her in California as soon as I got it in the mail.  And she was more then tickled pink that she could get any dress she wanted free.  Really, who doesn’t love free?   I called it the Angie’s Dress Shopping Spree.  lol 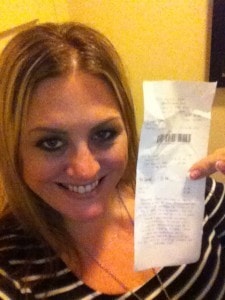 Angie, the other Angie, was able to get her dress before I was able to get to Old Navy to pick out mine.  She said she had a hard time finding a dress, cause for some reason each time she tried something the chest area would be wide open.  That isn’t good.  Finally, after three or four other dress tries, she tried on the one she ended up with and almost didn’t even take it off the rack.  She was worried that the stripes wouldn’t be flattering on her, but it ended up being the dress she fell for.  She wore it to work the next day and ended up getting all kinds of compliments.  WIN!  When she went to pay for her dress she said that the gal that checked her out was so excited she got a free dress that she was going around showing everyone the coupon and saying she just got this dress free.  Gotta love that!

The next day or two after Angie got her dress.  I was able to go to Lincoln City, OR where we were on our vacation and try on some dresses at the Old Navy there.  Sadly at that time none felt like the “right” one.  So I decided, with my husband, we would try one of our stores around us when we got back home.  We get back home & the next day we run into Old Navy at our mall.  I ended up trying on dresses, which I was going to do, cause I was just going to go with the black sweater dress.  I ended up trying that on again & three others.  I ended up with one that I so normally wouldn’t get, which to me is the fun of doing these kind of things.  After the guy that rang as out scanned my coupon, his eyes got really big.  That was the funny part, I don’t think he could believe that I just got it for free.  I think the gal next to him was used to the coupons cause she looked like she had seen them before when he asked her do I just scan this?  I love my dress.  It’s a long sleeve dress, which I didn’t have before, I mostly had maxi’s and such for summer time.  I also really  don’t wear stripes either, but am so glad I went with the one I did.  What a fun experience!  These two Angie’s had an amazing fun time picking out our dresses, its just to bad we couldn’t have done it together.  🙂 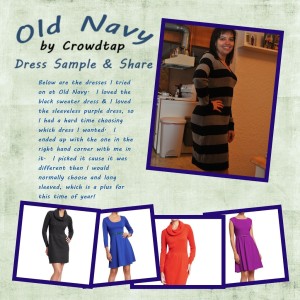