You are here: Home / Life / Feeling Powerless When You Have Hypothyroidism 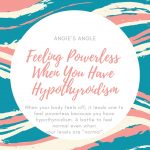 When I was first diagnosed with having hypothyroidism back in 2015, after feeling off for many years before, I thought my issues would be behind me. I’d get on my medication and we’d find the right level and all would be well again. Little did I know how wrong I could be.

Now for the first year I started to feel really normal. Some of my energy was back, my tingling had stopped, my periods regulated themselves. Things were good.

Here we are now though and for the last year(or maybe more), I’ve started to feel off again. Just having had done my blood test this last year and it was in the completely normal range. Here I am though feeling that “off” feeling again though.

Reading countless other people that have thyroid issues, this isn’t unusual. Your levels could be normal but you are still having the symptoms of having a weird thyroid that doesn’t work properly.

Feeling Powerless When You Have Hypothyroidism

Thankfully my most pronounced symptom the tingling isn’t not really present. Not saying I don’t get it here or there but nothing like I was having before. Nothing.

I am always tired though, always. It doesn’t matter if we had been doing things or if I have been just puttering around the house. I get super duper sleepy and often take a nap. My body just feels weighed down and I am pretty sure it has to do, at least somewhat, with my thyroid.

Being cold is another bother. This winter has been especially hard, often I can not get warm. In the house could be 72 and I am sitting there shivering. Blankets piled on me and still cold. And it’s not even been that cold of a winter here, minus here recently. The only time I don’t shiver is if the heater is running, as soon as it stops, I start getting really cold again. My hands though, are always freezing, like icicles.

My periods at least have stayed normal and haven’t been weird like they used to before getting on medication. That has been good.

The tingling, as I said, is still there but only briefly and rarely. I am forever grateful at least that portion has righted itself for the most part. Because it seriously made me think I was losing my mind.

Headaches. I get so many freaking headaches. Now am not 100% sure they are from my thyroid but it would make sense to me if they were connected. I get migraines too but haven’t had a really horrible one (knock on wood) since I started taking a magnesium at the beginning of the year. Still getting regular headaches though and sometimes those can be really bad.

In general I tend to ache. Like bone aching muscle aches. I lay with the heating pad before bed most evenings, which helps. I just ache though, often, and I really can’t explain it. It’s just there and is annoying and probably doesn’t help with me feeling sleepy.

Now, do I know for a fact that all that I am feeling is chocked up to having hypothyroidism? No. Reading other people’s symptoms that are going through the same thing makes me think likely it’s the case.

If you have hypothyroidism and have normal levels and are still feeling “off”. Know you are NOT alone and there are others out there that are feeling just as unbalanced no matter what tests might say.

What could help? Eat good healthy food at regular intervals. This is a hard one for me, breakfast is one of my worst offenders, often having nothing. Get good movement each day, again something I fail at often. I have heard though, with a good balance to be found, you can feel somewhat normal again. Sometimes it’s getting over that hump again and pushing to find what balance works for you.