You are here: Home / travel / We Found Adventure on the Long Beach Peninsula in the GMC Terrain: Part One 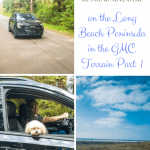 Loving travel as we do and yet not have been able to do much yet this year was killing us. Thankfully in May we finally found adventure on the Long Beach Peninsula of Washington. With a three night stay in Long Beach, Washington and the use of the gorgeous 2019 GMC Terrain.

This is a partially sponsored post. Thanks to GMC for their loan of the 2019 GMC Terrain for this fun adventure. However, all thoughts and photos are 100% our own.

Finally being able to take a few days away was so much needed. Normally doing a February vacation and several little getaways in between, it was getting to us not doing anything really this year yet. We did get to take a quick overnight trip to the Oregon Garden Resort but no real vacation. For us being able to take this 3-night vacation, it was just what the doctor ordered.

Our mission for this vacation was to spend as little money as possible and still feel like we had a vacation. I think, for the most part, we did just that.

Honestly, we didn’t know exactly where we were going until the week before our vacation. We knew only that we’d be heading to the Oregon or Washington coast. Knowing we were getting the 2019 GMC Terrain for the week was our main objective and what adventures would we find in it?

Life, in general, hasn’t been easy the last year, there have been more downs than ups but we keep going and finding the good in the bad. And thankfully the rise seems to be lifting and hopefully keeps doing so again. With that, let’s hear about how we found adventure on the Long Beach Peninsula in the GMC Terrain!

The GMC Terrain got dropped off to us on Friday, May 10th, but we were not leaving for the beach until the 12th. It was a pretty Ebony Twilight Metallic on the outside with a nice jet black interior. The Terrain was a pretty sight. We were eager to see what fun we’d have in it for the week.

Getting new cars to play in gets us so excited and normally we are right out there testing them out. Weirdly though I don’t think we got in it to drive it anywhere until that Sunday. We were in a funk. Looking forward to our vacation but still in a funk. Until Saturday evening it sat outside all by its lonesome. And only then to start packing it with what we could until Sunday morning when we’d get the rest packed up.

Arriving at the Akari Bungalows

Now we had never had the pleasure of staying at Akari Bungalows in Long Beach, Washington before. But you can bet I have spent hours on their website dreaming about staying in each bungalow. Now, why you ask do I dream about staying at each bungalow? Because each one is a bit different from each other.

For our first stay, we picked out bungalow 8. Picking that one because it had a mini kitchen and a jetted tub. Remember our object here was to spend as little money as possible on this vacation, so having some kind of kitchen was a must in our eyes. Making this the perfect little set up for the three of us and allowing us to eat our meals in.

There wasn’t much excitement Sunday. We settled ourselves into the bungalow before we took a quick stroll around Long Beach. Ending the evening with a quick dinner and some games. And of course, a nice hot bubble bath for me! No big adventure for us this day. But keep reading!

Monday was a slow start but we got lunch together to have a picnic somewhere and were off to find where we would land. Ending up at Leadbetter Point, which is the very North tip of Long Beach Peninsula. Eating lunch first before deciding which way we’d hike. We found no picnic tables upon arrival at Leadbetter Point. Which left us disappointed. Instead, we made a little sitting area on the little patch of grass that was there. Which worked out nicely enough.

A fight with my Nikon happened, which come on, let’s be honest, seems to be common anymore. Had about a complete and utter fit. We thought we got it to work. Only to find out later on our hike that wasn’t the case.

We got a small hike in on one of the paths around the point. Turning around on the path we were on because of a flood. Another path led uphill and while we wanted to take it; the overactive mosquitos were biting Jason like crazy, which made it unpleasant. After all that, we opted to just head back to the Terrain. A short hike but it was still a nice little adventure.

Back at the car, we used the wi-fi that came in the GMC Terrain to play Swagbucks Live and realized how amazing having wi-fi in the car is. That little feature quickly became one of my favorite features.

After we left Leadbetter Point, we were not sure exactly where to head after that. We recalled we saw a sign for historic Oysterville on our way out to Leadbetter Point. We decided to check that out. It was a beautiful little area, I’ll dive into that more in tomorrow’s adventure though.

Leaving adventure behind for the day, we ran into Astoria to buy me a new memory card for my camera in hopes that would fix our issue. Happily, it did and I could breathe a sigh of relief knowing that I’d be able to take many pictures over the course of the next couple days.

Ending the evening with dinner at the bungalow and once again a few games to relax and enjoy our time away.

Adventures and stories ending up being long for this Long Beach Peninsula vacation. And pictures aplenty! Because of those little facts, decided that breaking this up into two parts would be better for us all. Now that you’ve read adventure on the Long Beach Peninsula part 1. I finished Part Two for your reading pleasure – here.